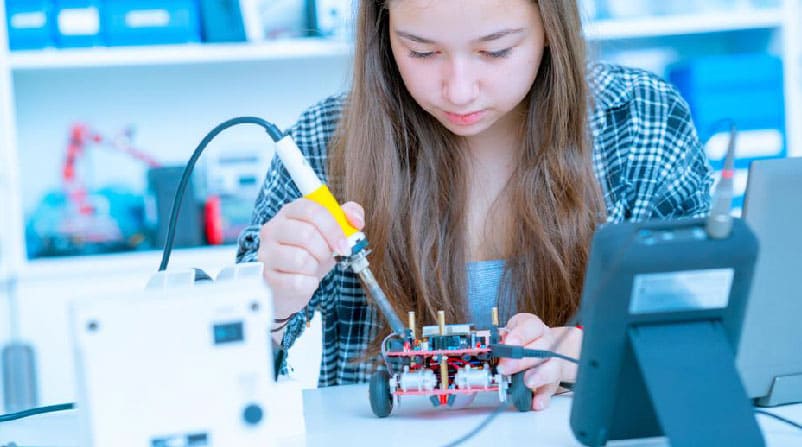 Renewable energy accounted for approximately 11% of the nation’s energy consumption and 17% of electricity generation in 2018, according to the U.S. Energy Information Administration. You can see the movement toward non-carbon options such as wind, solar, hydroelectric, biomass and geothermal power in action at institutions like The George Washington University. Three solar photovoltaic arrays now fulfill over half of the university’s electricity needs, making GW the No.1 school in purchasing renewable electricity from off-campus sources.

But initiatives like GW’s are just the beginning of the transition toward prioritizing renewable energy. So far, more than 90 cities and two states have committed to achieving a goal of 100% clean energy, and that means there’s a great deal of work ahead. For professionals who are building careers in Masters electrical engineering, renewable energy projects could bring rewarding opportunities and the chance to make a difference in our planet’s future.

As of 2018, the U.S. Bureau of Labor Statistics reported nearly one in 10 electrical engineers worked in power generation, transmission and distribution. Engineers at utility companies are commonly tasked with responsibilities like:

The BLS predicted that technical leaps in green energy will be one of the most significant drivers for new openings in the electrical engineering field over the years ahead. Professionals can advance in this employment landscape by expanding their technical skills in designing equipment and optimizing processes to support the shift toward sustainability. By focusing on the concepts that will drive the future of power systems, experts can respond to changes in organizational policies and the regulations that govern utilities providers and government agencies.

The following are just a few of the challenges that today’s electrical engineers face as they create energy solutions to power our future:

Power Storage for When the Wind Doesn’t Blow

One of the most crucial issues on the way to 100% renewable energy is the need for consistent power output even when weather conditions don’t cooperate. To stop using carbon sources, communities must be able to rely on green electricity all day and night in every season. It’s essential to pair renewable energy power generation with the technology for high-capacity storage that keeps the resulting electricity in reserve.

Currently, pumped-storage hydropower is the most common way of storing energy on the scale necessary for U.S. utilities. Most hydropower plants move water between two reservoirs at different elevations, pumping water uphill to reserve electricity. When power is needed to meet demand, the water returns to the lower reservoir to operate a turbine. The need for varied elevations create geographic limitations for hydropower facilities, but engineers can make this approach more sustainable by upgrading and retrofitting plants to increase efficiency.

On the other hand, there may be better ways to keep green electricity at the ready. Lithium-ion batteries, already used in electric vehicles and many electronic devices, appear poised to meet the growing need for energy storage over the next several years. In the past, this technology has been limited to only very brief applications in power plants. However, engineers are vastly expanding the batteries’ capacity, while dropping manufacturing costs make the technology increasingly practical for widespread use.

Some utilities providers have already adopted lithium-ion batteries that store up to four hours of energy. Thanks in part to the efforts of electrical engineers, further progress is on the way that could bring that maximum up to eight hours. Meanwhile, researchers are also exploring other storage possibilities, like rechargeable fuel cells.

Engineers who work for utilities or research and development firms may pursue many avenues in creating the next wave of power storage solutions. By enhancing capacity and efficiency, these advances have the potential to deliver a steady supply of environmentally friendly electricity to communities everywhere.

The solar panels and wind turbines that generate clean energy are often placed in locations far from population centers. To take advantage of that power, we need the infrastructure to bring the resulting electricity into homes and businesses. Electrical engineers working in renewable energy transmission and power grid development must address a wide range of issues, including:

The movement toward smart grids, which employ digital technology to monitor power use and collect data about transmission and distribution, is a key factor in enhancing sustainability. By reshaping the grid to operate more efficiently and adapt quickly to changes in consumer demand, engineers pave the way for wider use of renewable energy. Highly responsive smart grids are better suited than traditional systems to handle the variations in power supply that result from a switch to renewable sources.

Building and upgrading microgrids could be another important aspect of rethinking power transmission to be more environmentally responsible. These systems are capable of operating autonomously, allowing a specific area to use power independently from the traditional electrical grid. Even when an outage occurs in the broader system, a microgrid continues to generate power locally until broader service is restored. This technology is invaluable in emergency situations like natural disasters, but it can also contribute to green energy initiatives.

Systems that incorporate microgrids can allow more efficient energy transmission than traditional grids alone, leading to power systems that are more cost-effective and less wasteful. Further, some microgrids offer an environmentally friendly alternative by drawing on a renewable energy source, such as solar, biomass or wind power. With continued technological development, sustainable microgrids may prove central to making better and greener use of energy.

For populations in remote areas that are not connected to the grid, renewable energy hybrid power systems can expand access to cleaner electricity. These standalone systems can use energy from multiple sources, such as a wind turbine and photovoltaic cells. When there isn’t enough sunlight or wind, an engine generator powered by conventional fuel can take over.

It takes advanced technical knowledge and creative problem-solving to help revolutionize energy generation, transmission, distribution and consumption. Electrical engineering experts who understand the principles behind the latest in power systems, energy conversion and smart power grids can excel in careers on the cutting edge of renewable power. Completing a Master of Science in electrical engineering could be a crucial step toward gaining the depth of technical knowledge and management skills to advance into a leadership role in the future of sustainable energy.